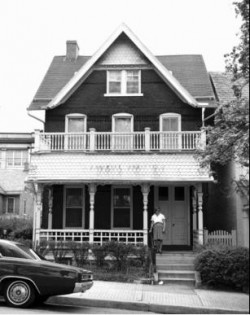 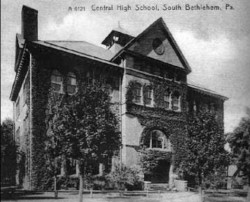 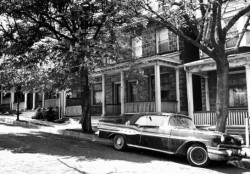 Near Bethlehem’s Packer Avenue, where Lehigh University meets the South Side business district, sprawls a patchwork of lawns and concrete plazas wrapped around classrooms, a library and campus shops catering to the country’s brighter minds.

This is the site of Bethlehem’s lost neighborhood, blocks of homes that vanished nearly 50 years ago to make way for Lehigh’s expanding campus. Lehigh University students and the South Bethlehem Historical Society are trying to piece together the history of those blocks bordered by Vine and Webster streets and Morton Street and Packer Avenue.

“For me, it’s always been like archaeology — digging into a place that was once a neighborhood, a vibrant community, that doesn’t exist anymore,” said Chris Campbell, a graduate student undertaking the project.

“This wasn’t just a bunch of historic buildings, honey,” said Mary Pongracz, 83, who had lived with her parents at 462 Vine St. “This was a neighborhood, where people lived and cared about each other.”

But there were a few rundown or vacant buildings on the block or student rentals that just weren’t kept up. This is the area that the Bethlehem Redevelopment Authority zeroed in on during its urban renewal program in the 1960s. The program tapped millions in federal dollars to clear what was deemed a blighted neighborhood and replace it with new development. The program led to creation of City Hall and the Colonial Industrial Quarter.

“This was after World War II and the baby boomers were coming of age and going to school. Campuses were expanding all over the country, many in smaller urban areas like Bethlehem. Lehigh was looking to expand,” said Julia Maserjian, digital scholarship project manager for Lehigh University’s Center for Innovation in Teaching and Learning. “It was good for Lehigh but not so good for the neighborhoods.”

The $3.7 million project meant Lehigh University would get land that would later be developed into Maginnes Hall, Fairchild-Martindale Library, Sinclair Laboratory and, more recently, Campus Square and the STEPS building. Broughal Junior High got a playground and St. Peter’s Lutheran Church a parking lot.

It was the second home Mary Pongracz’s mother, Anna, lost to urban renewal in south Bethlehem. Anna Pongracz, one of the program’s most vocal critics, called urban renewal “an absolute farce” at a public meeting. Another opponent, Simon A. Kelly, fanned those flames and called Lehigh “carpetbaggers” and accused it of “shoving us out.”

That argument was challenged by Charles Seidle, then vice president of administration at Lehigh. He said the project would “continue the progress of our city,” according to published reports of the meeting.

“More progress is required if Bethlehem is to meet its competition in other parts of the nation for new industry, new residents, new job opportunities,” he was quoted as saying. “We cannot stand still.”