was lost, but not the memories…

Lehigh University students and the South Bethlehem Historical Society are trying to piece together the history of those blocks bordered by Vine and Webster streets and Morton Street and Packer Avenue.

Were you or your family part of this neighborhood? Do you have stories and photos to share? Let us know… Contact us here

DOWNLOAD THE APP
Smartphone apps that act as guides for tours of Bethlehem neighborhoods can be found at gpsmycity.com/gps-tour-guides/bethlehem-5686.html

Highlights include the Bethlehem Skateplaza, the former Bethlehem Steel Corp. complex, the Chinese peace pavilion and a blue heron sculpture. During her travels, Samuels said she was pleased to discover Café The Lodge, a cafe along the greenway run by people with mental illness, and Jenny’s Kuali, a Malaysian restaurant she included on her lunch tour.

South Bethlehem Historical Society President Dana Grubb said he is grateful that Samuels put in so much time on a fundraising effort for the group. “I hope people will take advantage of it,” Grubb said. “Let’s face it. It’s the wave of the future. It’s the way people are going to travel.” Samuels and fellow historical society member Kenneth Raniere also wrote a book on South Bethlehem as part of the Images of America series, the proceeds of which also go to the group.

The Bethlehem Area Public Library South Side Branch used to be riddled with water stains and was outfitted with hand-me-down furniture from the main branch.

Now, the Webster Street library could compete for the nicest in the Lehigh Valley following $500,000 of renovations, library officials said today upon the branch’s reopening. The branch has new furniture, new lighting and a new layout that makes it appear larger, brighter and expands the children’s and teen areas. The renovation work also honored the building’s 1930 architecture, including a full restoration of its elaborate, textured ceiling. 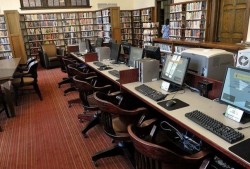 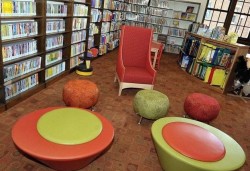 The branch has new furniture, new lighting and a new layout that makes it appear larger, brighter and expands the children’s and teen areas. The renovation work also honored the building’s 1930 architecture, including a full restoration of its elaborate, textured ceiling.

The South Side work was funded entirely by donations, including a $75,000 contribution from Lehigh University, a $5,000 donation from Air Products and $2,000 from the South Bethlehem Historical Society. Sands Casino Resort Bethlehem also organized two fashion shows benefiting the project, and library officials are hopeful the partnerships can grow for future projects at the library, Holzinger said.