The South Bethlehem I Once Knew

The South Bethlehem I Once Knew by Carol Dean Henn

I can still hear the sing-song voice of the peddler and fix-it man who drove through our South Bethlehem neighborhood every week. His ancient and rickety truck was loaded to overflowing with brooms, pots, pans, washboards, bolts of cloth, and tools to repair almost anything.

When he stopped at the corner of Morton and Fillmore Sts., women came outside to look at his wares and make their purchases. Money came from small leather coin purses tucked into apron pockets. He spoke with a heavy accent, doing transactions among the Windish, Hungarians, Slovaks, and Italians in “broken English” that sufficed for everyone. For reasons I’ve never known, he was called “the boney man.” He seemed to have no name. Word simply preceded him from backyard to backyard: “The boney man is coming.” 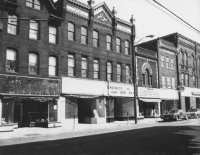 One of the many “specialty shops” on Third St. was Cotton Crest, pictured third from the right.

I thought about the boney man frequently in 2010, as the Sands Hotel took form, as a new Broughal welcomed students, and as SteelStacks moved from dream to reality. Before I lose the memory of them, I want to savor the South Bethlehem places I knew in the 1950s and ’60s.

The long-gone Central Elementary School on Vine St. was built to last for centuries. Periodically, students were assembled in a large second-floor room to watch grainy black and white films warning us of the ominous threat of communism, always shown as red arrows sweeping across Europe. In frequent air raid drills, we would be quick-marched into the dark tunnels The South Bethlehem I Once Knew by Carol Dean Henn of Central’s stony basement and were told to crouch on the floor and cover our heads with our hands. 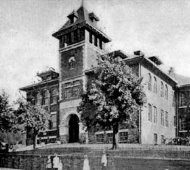 A few decades earlier, my mother attended Quinn School, located where the parking lot now serves St. John’s Windish Lutheran Church. Like other children of immigrants who had yet to learn English, she wore a name tag with her address on it—labeled like a piece of doors away, the delicatessen always had a free pickle from the barrel for a kid. Movie theatres abounded in South Bethlehem, none more colorfully nicknamed than the “Bughouse,” officially named the Lehigh Theatre at 20 E. Fourth St. There you could see movies for 25 cents and, on Tuesday nights, get free dishes. baggage in danger of being lost in a new country.

I remember almost every inch of the Municipal Market at Third and Adams Sts. I can still picture Rich’s Produce stand, Peter Heinrich’s Sausages, and Joe Phillips’s Meats. The Bethlehem Police Department was crowded into the second floor space above the Market.

Next door to the Municipal Market was the tiny A&P store, with its gigantic (to a five year-old) red coffee grinder. A few doors away, the delicatessen always had a free pickle from the barrel for a kid.

Movie theatres abounded in South Bethlehem, none more colorfully nicknamed than the “Bughouse,” officially named the Lehigh Theatre at 20 E. Fourth St. There you could see movies for 25 cents and, on Tuesday nights, get free dishes.

In pre-television days, you could build a fine set of tableware, and South Bethlehem families dined for decades on “Bughouse” dishes, just as they served food from platters advertising Miller ’s Furniture, and poured beer and soda from pitchers advising “Bank on Banko.” 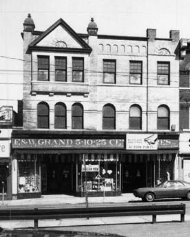 A Third St. “five and dime”

Long-gone stores along Third St. included Alexy Shoes, Tom Bass, Eagan’s Menswear, Cotton Crest, the Victory Shop, Phillips Music Store, Kroope’s, the HUB, and 5- and 10-cent stores including the “up and down fivie.”

Martin’s Furniture remains as a multi-generational icon of the area. Evans Street had cigar factories and Fourth Street had factories producing “intimate wear” for ladies.

Every block seemed to have its grocery store—the Purity, Kay-Gee’s, Johnny Gregar’s, Albert’s, and Gergar’s. On Fifth St., the Roosevelt Restaurant had homemade crab patties, and Theresa’s Fillmore St. Restaurant at the corner of Fifth and Fillmore had the best food on the planet. Period. 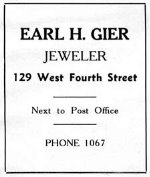 In the 1920s, my paternal grandfather owned the Globe Theatre at Fourth and Wyandotte Sts. Even in the Depression, people paid to go to the movies.

My grandfather once placed an ad in the Bethlehem Globe Times announcing that “America’s only female projectionist” was showing movies at the Globe—it was only my grandmother, helping in the projection booth; but people lined up to see movies shown by a woman.

I’m glad I was born at a time when back doors and front doors were left open all day, a habit my Aunt Mary on Webster St. maintained into her 80s— when people who lived six blocks away from you, knew your name and when you had to be home— when I could sit in the sun with white-haired Mr. Connell in front of Francis J. Connell’s Funeral Home and tell him all about my school day, a school day created by students’ curiosity and teachers’ skills, not by state tests. 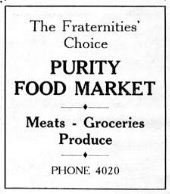 South Bethlehem produced workers for Bethlehem Steel, the Railroad, Laros, and Sure Fit, but it also produced scores of doctors, lawyers, teachers, and engineers.

“South Side” children and grand-children of immigrants attended Harvard and Yale, as well as Lehigh and Moravian.

I’m certain that the entertainment at SteelStacks will be splendid . . . but I’ll close my eyes, at least once, and remember summer evenings filled with fireflies on Fillmore St., and once again I’ll hear Mr. Jaroschy in his back yard, three houses away, playing “When a Gypsy Makes His Violin Cry.”

I’ll offer a toast to the success of SteelStacks, but that toast will also be to the Market, the “Bughouse,” the Globe Theatre, and the magic that was small-town life in South Bethlehem.

—Carol Henn lives in Hanover Township, Northampton County, and is the Executive Director of the Lehigh Valley Community Foundation